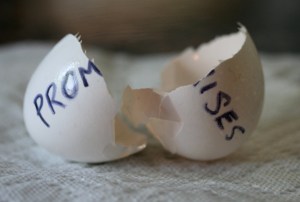 So we’re walking around a local store last night and decide to cruise the rows of clearance items. You never know when you’re going to stumble into a great deal.

And there it is… a George Foreman Grill! It was originally $80 but is on sale for $60. We decide to think about it as we do some other shopping.

Then we walk through the kitchen wares area and come across a George Foreman Grill for only $39. Curious about the difference I walk back to check the one in the clearance area.

Turns out there is a difference. The one for $60 is 100 square inches and the one for only $39 is a whopping 144 square inches! No, that’s not a typo. The cheaper one is not only newer but also bigger!

How many of us would have gone for the first grill and gotten taken in by the promise of saving $20? In the end it would have cost us more than was necessary!

Sin offers that same kind of promise. The notion that we’re getting a great deal when in reality we’re getting taken advantage of. Yet what we lose isn’t just a few dollars but a little piece of our soul. What sin offers amounts to nothing more than false promises!

By faith Moses, when he had grown up, refused to be known as the son of Pharaoh’s daughter. He chose to be mistreated along with the people of God rather than to enjoy the fleeting pleasures of sin. He regarded disgrace for the sake of Christ as of greater value than the treasures of Egypt, because he was looking ahead to his reward. ~ Hebrews 11:24-26

The lure sin uses is getting us to look at the immediate payoff of pleasure rather than the long-term benefit of righteousness and peace.

What have you been choosing lately?