As important as loving God

Even if you’re not a fan of NFL football you’ve probably heard of Tim Tebow. He is the current quarterback of the Denver Broncos and has gotten plenty of publicity for being very open about his faith in Jesus.

Every week, Tebow picks someone who is seriously ill, suffering, injured or dying and brings them to the game. Airline tickets, rental car, hotel room and meals – he takes care of it all. Then he visits with them before and after the game. 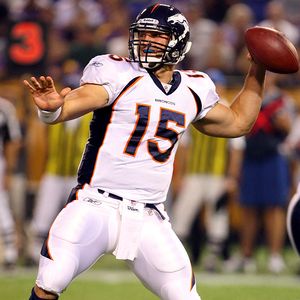 Two weeks ago Tebow stunned the Pittsburgh Steelers with an 80-yard OT touchdown pass to win the game. In the hour that followed Twitter exploded with 9,420 tweets about Tebow per second! And an ESPN poll was naming him the most popular athlete in America.

Tebow during that same hour? He was talking to 16-year-old Bailey Knaub about her 73 surgeries so far and what TV shows she likes.

“Here he’d just played the game of his life,” recalls Bailey’s mother, Kathy, of Loveland, Colo., “and the first thing he does after his press conference is come find Bailey and ask, ‘Did you get anything to eat?’ He acted like what he’d just done wasn’t anything, like it was all about Bailey.”

“It was the best day of my life,” Bailey emailed. “It was a bright star among very gloomy and difficult days.”

It makes no sense! Most NFL players barely talk to teammates before a game, much less visit with a guest. Isn’t that a huge distraction?

Just the opposite,” Tebow says. “It’s by far the best thing I do to get myself ready. Here you are, about to play a game that the world says is the most important thing in the world. Win and they praise you. Lose and they crush you. And here I have a chance to talk to the coolest, most courageous people. It puts it all into perspective. The game doesn’t really matter. I mean, I’ll give 100 percent of my heart to win it, but in the end, the thing I most want to do is not win championships or make a lot of money, it’s to invest in people’s lives, to make a difference.”

To whom will we make a difference today?

Filed under Christianity, influence with the world, Loving others

4 responses to “As important as loving God”