A Peek Behind the Curtain

They were dispersed over a large area and feeling quite alone. Experiencing great difficulty on many levels. They likely felt very discouraged. Perhaps they even questioned their faith in this carpenter from Nazareth who had come back to life.

I’m speaking of John’s intended audience, those first followers of Jesus who would have read the book or letter of Revelation and marveled at all the strange imagery.

I don’t imagine that the life of following Jesus was turning out exactly like they had expected. It seldom does.

John the Baptist saw Jesus and declared, “Behold the Lamb of God who takes away the sins of the world.”

But just a short time later when he sat in jail about to lose his head, John sent disciples to ask Jesus if He was the One they had waited for or if they should wait for another. I’m guessing that John thought doing life with God would be different.

Hadn’t Jesus come to heal and comfort and restore? Why is following Him so difficult, so unpleasant at times? Is it really worth all the hardship and sacrifice?

In The Wizard of Oz Toto pulls back the curtain to reveal a man masquerading as the great and powerful Oz. They are given a different perspective on what’s really going on and who is in charge; and it’s a big disappointment.

But the peek behind the curtain given to John in the form of a vision is much different. In it we catch a glimpse of what life will be like in the very presence of God. And it’s awe-inspiring!

In John’s day, Rome appeared to be in control; but it was really God who was working behind the curtain of our reality.

In our day, Washington, D.C. appears to be in control; but it is really God who is working behind the curtain of our reality.

The center of the universe is heaven, and the center of heaven is a throne, and there is Someone, our triumphant God, sitting on the throne.

Why is following Jesus often so difficult now?

Because we are not home yet!

So hang in there and keep running the race. Keep fighting the good fight. Hold onto the faith.

One day soon God will make all things new!

Dietrich Bonhoeffer (February 4, 1906 – April 9, 1945) was a German Lutheran pastor, theologian, a participant in the German resistance movement against Nazism and a founding member of the Confessing Church. He was involved in plans by members of the Abwehr (the German Military Intelligence Office) to assassinate Adolf Hitler.

He was arrested in April 1943 by the Gestapo and executed by hanging in April 1945, 23 days before the Nazis’ surrender. His view of Christianity’s role in the secular world has become very influential.

Bonhoeffer wrote the prayer below while incarcerated in a Nazi prison, uncertain of what his future would hold.

It’s a new day and most of us are likely enjoying freedom outside the walls of a prison. We may be facing a variety of events and issues; some big and some small; some tough and some easy. But few of us are facing execution.

In the midst of his darkness, Bonhoeffer asked God for the liberty and strength to live in such a way that he could one day stand before God unashamed.

When we pray today, what will we ask of God?

It turned out to be some of the best advice we ever received!

Years ago, when Susan was pregnant with our first (of 6) children, some close friends had a baby shower with the usual activities. But they also had all the other moms write down their best advice.

Among the nuggets of wisdom was the advice to watch our child sleeping. It was said to be one of the most precious moments a parent can experience.

And they were right!

If you’re a parent, you’ve been there. After a day stuffed full of play and discovery your little bundle of energy is all cleaned up and lovingly tucked into a warm, safe bed for the night.

But what if someone broke into your house to kidnap your child? What if little boys were stolen away in the middle of the night and forced to carry guns and kill people? What if little girls were ripped from their loving homes and used as sex slaves?

Probably not where you thought I was heading with this blog, and the very notion of little children being stolen from their parents probably seems so foreign that you can’t begin to imagine such a thing happening.

The little boy who was the reason for that baby shower so many years ago is now 21 years old and yesterday I watched a video on his Facebook page that broke my heart.

Joseph Kony is one of the world’s worst war criminals who is responsible for destroying the lives of some 30,000 innocent children.

The video below is nearly 30 minutes long. Believe me, I know the value of even a single minute. And I wouldn’t ask you to use 30 of them if it weren’t vital. PLEASE make the time to watch this video.

Then get involved by going here and pass it along to others. It’s just too important to ignore!

We should all be so controversial!

Controversial conduct by elite athletes is nothing new and likely won’t go away anytime soon.

A few weeks ago, a college basketball game between Cincinnati and Xavier ended in a bench-clearing brawl. The fight got so intense that the referees decided not to play the final nine seconds. The media and fans were appalled and demanded strong measures.

Just a week before this incident the NFL announced that eleven players had failed drug tests. The media and fans were rightly appalled.

A recent Atlantic Monthly article spoke to this issue by listing the “15 Most Divisive Athletes in Recent History.”

I was not surprised by any of those who made the cut for this editorial save for one – Tim Tebow. Even if you’re not a big NFL fan you are likely familiar with this young man and his recent on-field exploits as quarterback of the Denver Broncos.

Others on the list included Michael Vick, Barry Bonds, Dennis Rodman, Pete Rose and O.J. Simpson. Let’s see… that’s one man convicted of animal cruelty, another for obstruction of justice, one guy who appeared at a book signing wearing a dress, another for tax evasion who was banned from baseball for betting on games and one who in all likelihood killed his ex-wife.

So what did Tebow do to make this notorious list? It started a few years ago when he made a TV ad in which he states that he was glad that his mother didn’t abort him. But the latest controversy is because he is upfront about his Christian faith.

I know! It’s shocking! Wait until they hear about how he grew up serving the poor overseas! Imagine the scandal that will be!

We should all be so controversial!

Filed under Accountability, Christianity, Evangelism, influence with the world, Persecution

Remembering those without freedom! 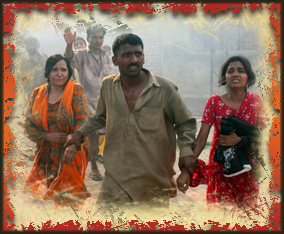 November 13 – International Day of Prayer for the Persecuted Church

In the traditional church calendar, “All Saints Day” and “All Souls Day” stand out in the month of November, set apart to remember the saints of the church and the souls of those who departed this world. It is fitting, then, that the modern church has set apart the month of November to remember and pray for the persecuted church, through the International Day of Prayer for the Persecuted Church (IDOP).

There are many countries in the world today where Christians are martyred for their faith. Believers in Afghanistan are facing death threats; Christians in Uzbekistan, Nigeria and many other countries all around the world face violence, imprisonment and even death.  There are other places in the world such as North Korea where acts of persecution take place, but we don’t see or hear of it. Brother Andrew of Open Doors once said, “Our heroes are not with us simply because they are in prison.”

IDOP is a time set apart for us to remember thousands of our Christian brothers and sisters around the world who suffer persecution, simply because they confess Jesus Christ as Lord.

Please pause for a few minutes right now to pray for their protection. Ask God to bring this issue to your mind throughout the coming month and when He does, pray again! To find out more or get involved click here.