How we view God is critical to our relationship with Him. But equally important is what we understand about how God views us!

Like a lot of people I know, I grew up with an image of God as an impossible-to-please task master who barely tolerated us and was always ready to smack us on the hand (or worse) when we made a mistake or stepped out of line.

We are told in Scripture to “fear the Lord” because He is God, but the kind of fear I walked in was not healthy or intended by God. As Mark Batterson puts it:

Ultimately, the only thing we ought to fear is living outside the umbrella of His authority. Nothing fills you with holy confidence like knowing that God Himself is your advocate. You don’t have to take matters into your own hands, because they are in the hands of God Almighty. You can bless those who curse you. You can pray for those who persecute you. You can love your enemies. Why? Simply because you know that God is your advocate. ~ Excerpted from Soulprint by Mark Batterson

God is our loving Creator who delights in us and is always there for us. No one on the face of this earth can fill that same role!

As we give ourselves to participate in His unfolding story of grace and truth we can have confidence that we face nothing alone! He is always with us and for us!

He is our divine Advocate!

The one healthy fear!

In his book Fearless Max Lucado shares the following account:

At 8:17 on the evening of March 3, 1943, bomb-raid sirens bansheed through the air above London, England. Workers and shoppers stopped on sidewalks and boulevards and searched the skies. Buses came to a halt and emptied their passengers. Drivers screeched their brakes and stepped out of their cars. Gunfire could be heard in the distance. Nearby antiaircraft artillery forces launched a barrage of rockets. Throngs on the streets began to scream. Some people threw themselves on the ground. Others covered their heads and shouted, “They are starting to drop them!” Everyone looked above for enemy planes. The fact that they saw none did nothing to dampen their hysteria. 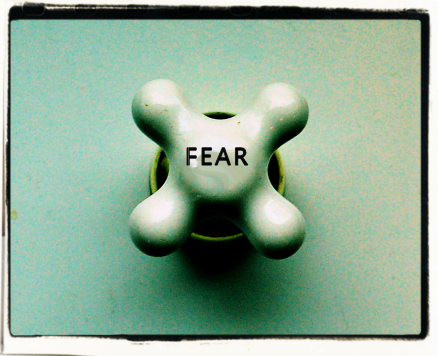 People raced toward the Bethnal Green Underground Station, where more than five hundred citizens had already taken refuge. In the next ten minutes fifteen hundred more would join them.

Trouble began when a rush of safety seekers reached the stairwell entrance at the same time. A woman carrying a baby lost her footing on one of the nineteen uneven steps leading down from the street. Her stumble interrupted the oncoming flow, causing a domino of others to tumble on top of her. Within seconds, hundreds of horrified people were thrown together, piling up like laundry in a basket. Matters worsened when the late arrivers thought they were being deliberately blocked from entering (they weren’t). So they began to push. The chaos lasted for less than a quarter of an hour. The disentangling of bodies took until midnight. In the end 173 men, women, and children died.

No bombs were dropped. An enemy attack didn’t kill the people. Fear did.[1]

Is there anything we can do to keep from being overwhelmed by fear? Yep! Develop a healthy fear of God. Proverbs 1:7 states:

The fear of the LORD is the beginning of knowledge, but fools despise wisdom and instruction.

Do not fear those who kill the body but are unable to kill the soul; but rather fear Him who is able to destroy both soul and body in hell.

This does not mean that God wants us to live in dread of Him but to recognize that when we are struck with how big and powerful and awesome and fearsome God is; then we don’t have to fear anything else in life. A big God translates into big courage. A small view of God generates very little courage. David had a big view of God and in Psalm 27:1 he declares:

“The LORD is my light and my salvation; whom shall I fear?”

When Christ is great, our fears are not!