Joining God in His story

Genuine expressions of your love for Christ are often quite small, simple even.

Your opportunities to work alongside God will be revealed through your friendship with Him. He will invite you into His story in ways that uniquely fit you—but He may also lead you to do things that are not in your comfort zone.

~ Excerpted from Get Lost by Dannah Gresh

How will we join God in His story today?

This is where the Church belongs! 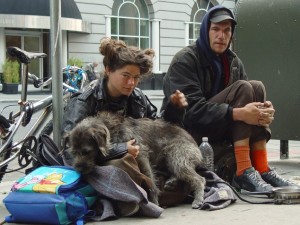 Like most of us, Thomas Keinath felt the need to spend some time away from the office. In Keinath’s case, the “office” is Calvary Temple, a “mega-church” with a 2,000-plus seat sanctuary in an affluent suburb, in Wayne, New Jersey.

Instead of a personal retreat or a fun-filled vacation, Keinath spent that week living with the homeless in nearby Paterson, New Jersey.

During the day, he wandered through the streets dressed like everyone else. At night, he joined the homeless as they built fires to keep warm from temperatures that dropped into the teens.

He wrote mini biographies about the people he met and their life story. Why would he do all of this?

According to Keinath, “I needed to understand what they were experiencing, and I needed to feel their pain; how could I bring help or healing to the streets if I did not know what their needs are?”

To put it bluntly, people in Wayne tend to avoid Paterson like the plague. But not Pastor Keinath and the folks at Calvary Temple.

This church is reaching out to their neighbors in some vital and tangible ways. They are not only taking basic supplies to the homeless but they are bringing them to services at the church on Sundays.

This is just the beginning of what Keinath calls “a long-term solution” that includes building a center that will “shelter the homeless while helping them recover from problems including substance abuse.”

Loving our neighbor as we love ourselves (Matthew 22:39) is being the church as God intended. It’s living out the gospel like the Christians of Caesarea did centuries ago.

In the early fourth century, the city was hit by a plague. While everyone was fleeing the city, the Christians stayed to minister to the sick and dying.

As the church historian Eusebius wrote, “All day long some of [the Christians] tended to the dying and to their burial, countless numbers with no one to care for them.” Other Christians took it upon themselves to feed the rest.

This is how Christianity prevailed over Rome and spread like wildfire. And the same is still possible today.

Hitting the streets to meet peoples’ needs. This is where the Church belongs!

Filed under Christianity, Church, Compassion, Generosity, Grace, influence with the world, Inspiration, involvement with the church, Kingdom of God, Loving others, Serving